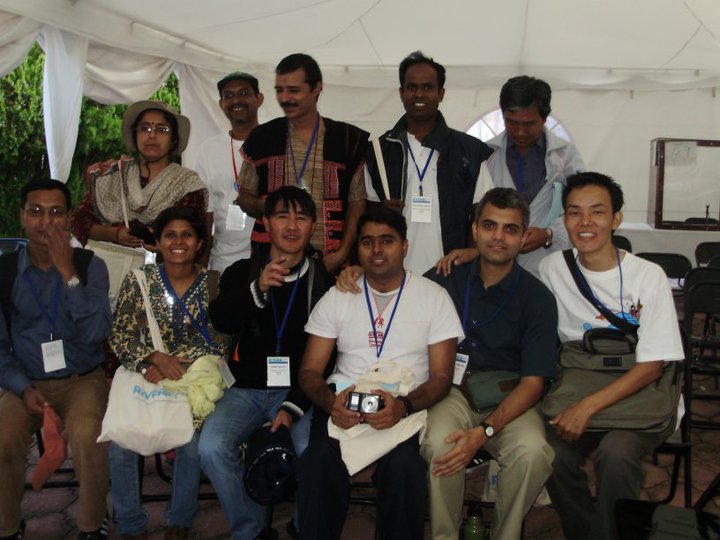 It’s hot sunny afternoon and the weather is dry in this far rugged country side. A truck stops by the bar and a man with a hat and a big moustache comes out of the vehicle. This is ‘Mexico’ that comes to my mind. I had the good fortune of visiting this country as I was invited by International Rivers, an organization based in Berkeley in California, to attend its third meeting of the dam affected people.  The meeting was held from  October 1 to 7 in a small Mexican town of Temacapulin.

This sleepy town became the hub for discussion, seminars and sharing information to develop collective strategies to strengthen the global movement to protect rivers and the rights of the communities that depend on them. Around 300 participants from different dam affected communities from 60 countries took part in the meeting, aptly entitled ‘Rivers for Life’.

I was recommended by my friends in Delhi and Pune to attend this biggest ever gathering of dam affected communities from around the world where I represented my small Idu Mishmi tribal community which is now faced with the collective threat of 17 large dams. On arrival at Temacapulin, we were greeted with smiles. This town of 500 people has centuries old beautiful heritage monuments, a cathedral and a lively community. The bad news is that this town will be inundated if the big dam called El Zapotillo is built and the people living here will have to face eviction.

The local people are strongly against the construction of the dam. So by participating in the meeting, we not only became part of the global alliance against big dams but also became part of their local struggle.

In Temaca, each day started with the early morning ‘mistica’, a 15 minute gathering for solidarity. It went as the most rousing moments during the meet where participants from different countries would come together to sing songs of resistance with protest banners. In the meeting we were part of the Affected People’s Forum where we shared our stories of resistance with other affected people from Vietnam, Philippines, Thailand, China, Mexico and Burma.

Some participants wore red bandana of whom we were advised not to click pictures of them. We were told they had come to this meeting at great personal risk and came from countries where the Government is extremely repressive. I was curious about one such young activist who is based in Thailand. She told me that she left her family back in northern highlands of Burma to continue with their struggle against big dam being built in their homeland. These highlands are where many ethnic groups that share cultural similarities with tribals from Arunachal inhabit. Since Burma doesn’t allow free voices and protest, many activists like her work from outside the country.

Though activism in Arunachal has been so far met with soft repression, but the slow built up of heavy military presence can pose permanent security challenges to any future voice of dissent. One of the recent developments in Arunachal is the rapid militarization of the state and it has been apparent due to threat of border incursion by Chinese Army on pretext of Chinese claim on the state. Other reason is to provide security to infrastructure such as dams and highways for which the state Government has plans to mobilize 30,000 troops in this frontier state.

The importance of such an international meet is that people at grassroots can get access to funders and organizations that can help sustain local movements. On the growing anti-dam movement in Arunachal, recently many politicians have accused ‘outside forces’ of discouraging development in this interior region. But to resist the ‘outside agents and companies’ that are ‘luring’ and ‘misguiding’ our state Government for “hydro dollars”, we also need ‘outside forces’ to stop these profit mongers from exploiting us.