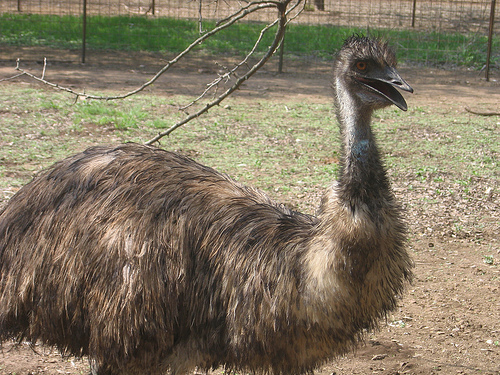 Most of the states in Northeast India have been practicing hunting for food and as well as in cultural associations during festival. However, the age old hunting practice has now become a threat to several endangered species in the region. Birds like the Hornbill are now rarely found, in regions where they once frequented in huge numbers.

The biodiversity of this biodiversity hotspot is under threat of extinction and something surely needs to be done before its too late. One such sustainable way of preserving many ‘endangered’ species is to promote poultry initiatives in an economically viable and socially beneficial manner.

Emu is the second largest bird in the world, with a height of 5-6 meters and a full-grown weight of 40-60 kg. It is known to be the most beneficial poultry since no part of it is wasted. Among the poultry birds, Emu has the highest resistance to diseases. An adult female Emu starts laying eggs normally from November to February and lays upto 30 to 40 eggs at the average rate of three eggs in a week.

An Emu egg which can be fertilised can fetch upto Rs. 2,500 in the market. The meat of Emu right now is so expensive that it is sold in the market at the rate of Rs. 1,000 per kg and the delicacies made are served in five star hostels. With time and proper introduction in the country, and as business picks pace, the price will surely go down.

The state of Manipur has taken the initiative to introduce sustainable practices in this direction with the introduction of ‘Emu Rearing’. Emu rearing had been successfully carried out by KVK Sylvan at Henbung, Senapati and Foundation for Environment and Economic Development Services (FEEDS) in Manipur. They now look forward to popularizing Emu farming in the entire Northeast region. Although considered to be a rare and expensive bird in India, Emu farming is popular in states like Tamil Nadu, Maharastra, Andhra Pradesh and Karnataka.

Talking about the newly launched practice, Dr. R.K. Imotomba Singh, Programme Co-Ordinator of KVK Sylvan and FFEDS, Manipur informed that Emu have to be fed thrice a day with crushed wheat and maize or with poultry feeds available in the market and properly washed leafy vegetables.

By the time they are 18 to 24 months old, Emus become sexually mature adults. And one unique character of Emu quite different from other domestic birds is that although the female lays the eggs, it is the male which is responsible for hatching them. After a female Emu lays 7 to 9 eggs, the male Emu takes over the task of hatching the eggs.

So far KVK Sylvan and FEEDS, Manipur have provided training to around 20 poultry farmers from different parts of Manipur with an eye on promotion of Emu farming widely in the State. Dr. R.K Imotomba said that plans are afoot for organising more such training programmes and popularisation of Emu farming not just in Manipur but also in other parts of the North East region. This will help not only in improving the economic condition of the people but also the protection of the native biodiversity of the region.

However, what needs to be taken care is to ensure that introduction of such a bird species (especially in the event that it goes wild) does not have any interfering impact on the existing wildlife and biodiversity. The first few years of such an introduction should therefore be carefully monitored.

Nagaland and some other States have also given positive response to the proposal of SAF Emu Farm at Chennai for supplying Emu chicks to the Northeastern States. After Manipur, EMU farming has now been introduced in Assam. A private organization has started rearing 11 pairs of EMU birds, at a farm located in the outskirts of Guwahati.

The government has also listed the emu farming in poultry sector and has started providing loans for it. With such an initiative in place, it is to be seen in the coming days as to how many will ‘hunt’ for loans to secure economic gains for themselves and biodiversity conservation in the region.