Rubber Cultivation: A Rewarding Offer for the Northeast Farmer 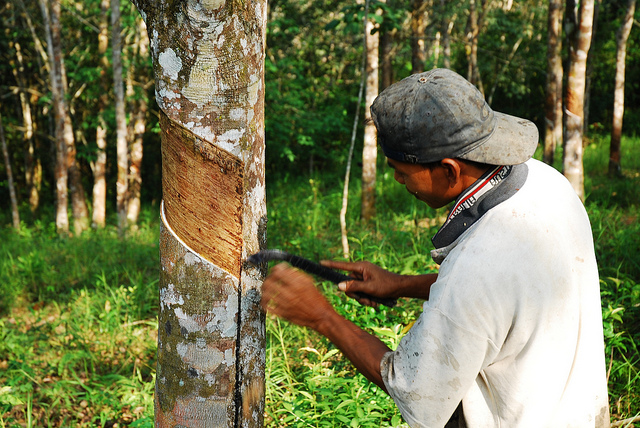 Toy balloons, pencil erasers, rubber bands, hoses, belts, gloves, aircraft tyres and nameless others, what do you find similar in all these products? For most people, the first thing they would say is the flexible characteristic of the above goods. However, if we further ask them to guess the main ingredient of these products, t won’t take long before they guess the right answer, which is RUBBER.

In modern world, the usage of rubber–both synthetic and natural–is innumerable. It is considered highly sustainable due to its renewable quality. The demand for natural rubber is high in the market. Asia produces the highest amount of natural rubber in the world. In India, Kerala is the largest producer of rubber followed by Tripura.

The favourable climatic conditions found in the Northeast are suitable for the flourishing growth of rubber trees and nearly 4,50,000 hectares of the region’s arable lands has already been marked for rubber farming. The commercial rubber plantation in the Northeast was introduced during the British colonial rule.

Farmers in the regions are now fast realizing the economical viability of rubber cultivation and they have started growing these valuable cash crops on large scales. A perfect example could be seen at Dhoopcherra village in Tripura, where the Jhumia tribals are practicing rubber cultivation.

Rubber cultivation is a labour-intensive practice and thus generates rural employment. The Ministry of Commerce and Industry’s Rubber Board has implemented various projects such as the ‘Accelerated Development of Rubber Plantation’ and ‘Rubber Development’ in the North East. Awareness camps and training programmes are being held for farmers. Besides, subsidies and work, land is also provided to them. Local rubber farmers in Gopalpara district are already benefiting from the venture.

Another positive aspect of rubber cultivation is its ecological benefits. Rubber plants enrich soil’s organic matter by litter recycling and at the same time  prevent soil erosion. The overall analysis of rubber plantation in the Northeast seems quite profitable, both economically and environmentally.

Image by CIFOR over Creative Commons

19 thoughts on “Rubber Cultivation: A Rewarding Offer for the Northeast Farmer”