Sikkim: Gaining Popularity as the Ecotourism Destination in the Northeast 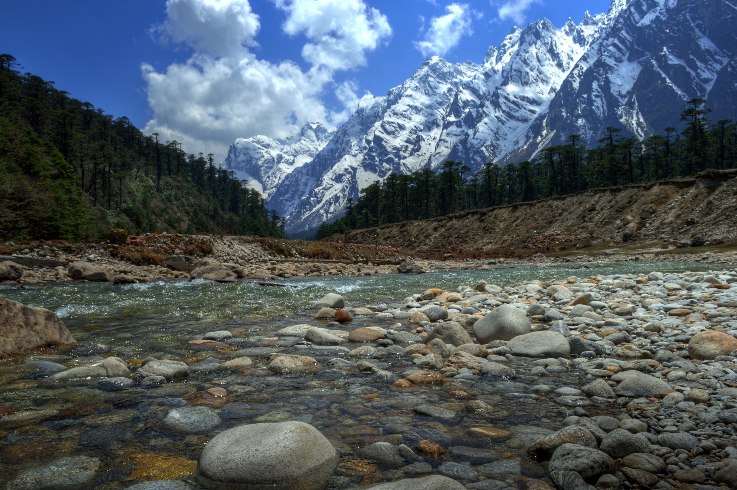 Spread below the Kangchenjunga (8586 m), the third highest mountain in the world, Sikkim is the 22nd state of India. Also known as the Valley of Rice, with a rich flora and fauna, Sikkim is home to the beautiful varieties of orchids, sprawling tea estates, cardamom forests and also the rare red Panda. The state has many protected areas in the form of National Parks and wildlife sanctuaries.

Sikkim has been taking rapid strides in the ecotourism sector and has now become a major ecotourism destination in the Northeast region. According to the data released by the Ministry of Tourism for the total number of domestic and foreign tourist visits to Northeastern states for the period 2007-09, Sikkim received the maximum number of foreign tourists. The state also has a Code of Conduct for Ecotourism (Click to read).

The state is a major regional centre for biodiversity due to its variety of landscapes and climates ranging from tropical to alpine. There are some 6,000 plant species, including around 4,000 flowering plants, and the state’s alpine areas are famous for their medicinal herbs (100 species) and rhododendrons, while the temperate and sub-tropical belts boast of some 400 species of orchid. Sikkim has around 1,400 species of butterfly, many hundred different species of birds and tens of different species of amphibians and reptiles. Around 13% of the state’s area has been declared a protected area meant exclusively for the wildlife.

Over the last few years, new trekking trails like the Everest Singalila in Hee Bermiok, Yambong Singalila at Nambu and Areylungchok Dzongri in Labdang have been opened which have resulted in improving the socio-economic condition in these remote villages. Societies such as The Ecotourism and Conservation Society of Sikkim (ECOSS) which is a group of like minded people along with UNESCO as a project partner, aim at promoting community participation in the area’s tourism development. This also helps generate employment opportunities and income-generating activities for local people through the development and management of tourist home-stays, as well as through training in the skills needed for local people to become cultural and nature guides.

The Khangchendzonga Conservation Committee (KCC) has come up with innovative ecotourism packages to beat the lean season. These includes packages like the “Monsoon Magic” Alpine Treks and the Subtropical Winter Treks. Although the heavy monsoon rains result in roadblocks and communication hurdles, this is also the time when the alpine zone comes back to life after the long winter hibernation and becomes one of nature’s finest gardens where countless wild flowers bloom in quick succession such as the Primulas, Potentillas, Poppies, Cobra-lilies, Saxifrages, Rhubarbs, wild Roses, ground Orchids, dwarf Rhododendrons and many more. Dzongri, Singalila, Yambong, Areylungchok and Yumesamdong are some of the top alpine destinations. In an eight days “Monsoon Magic” package one can guarantee atleast 100 different alpine flowers in full bloom.

During the winter, Sikkim is blessed with extensive tracts of fabulous subtropical and temperate forests which are snow free throughout the year like the lower belt of Namchi, Soreng and Rhenock subdivisions along the Great Rangit, Rammam and Rangpo rivers. Some of the possibilities are the subtropical Sal forests along the Greater Rangit valley along Melli-Sumbuk-Kitam-Ghoom-Majhitaar. The Namchi, Damthang, Samdruptse, Tendong and Bikmat, through pristine Chestnut and Oak forests, is also another trekking circuit which can be explored.

Sikkim is famous for its white water rafting adventure sport offering a great adventure experience. River banks have adjoining deep forests and interesting rapids to attract river rafters. Makhna-Sirwani-Bardang-Rangpo and Saikip-Jorethang-Majitar-Melli are the two famous rafting routes in Sikkim. The best time to visit Sikkim and get the best out of  its beautiful and rich environment is during the months from March to June and September to December.

Note: Being a border state, it is advised that the domestic visitors travel with a valid identity proof. The Foreign visitors are required to acquire an Inner Line Permit (ILP) to visit Sikkim, which is available at Delhi, Kolkata and Siliguri.