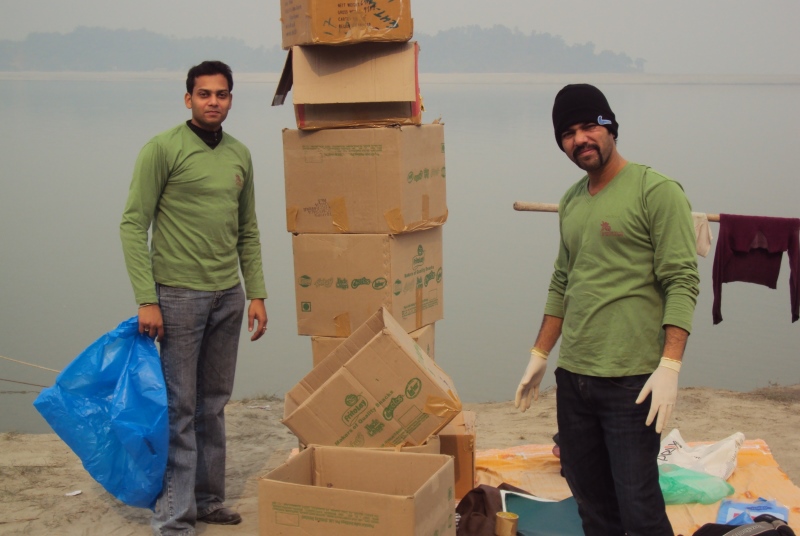 Each year, the Brahmaputra River front in Guwahati witnesses large number of picnic and parties around the New Year’s eve. People celebrate, but sadly, don’t realize the volume and kind of waste they leave behind and the damage that it causes.

Waste like plastic and glass bottles, plates, polythene, leftover food and so on leads to pollution of the riverfront which has both immediate and long term impacts. Keeping this in mind, the Ecotourism Society of Northeast India made an attempt to generate awareness on this issue with the riverfront stakeholders.

An Eco-friendly picnic was celebrated along the river in which dustbins were set up and picnickers were encouraged to use these. They were also explained how this will help in keeping the place clean for someone else to celebrate as well. Ten dustbins were installed in the morning on the New Year’s Day along the riverside (Kachari Ghat).

The dustbins were picked up in the evening and the garbage eventually dumped in GMC dustbins for further disposal. The activity was also carried out with the hope that it becomes a role model for the eco-prosperity of the region as a whole, and encourage other NGOs and Government Agencies to provide dustbins in all places that attract picnickers.

With this, the youth in the region have shown that time for action is here and we hope this celebration of change with the New Year will continue through out the coming decade!