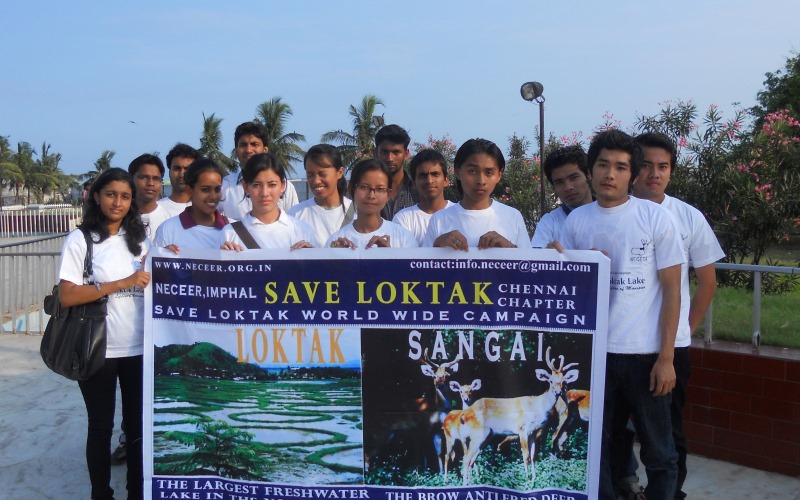 After successfully organizing the ‘Worldwide Save Loktak Campaign’ in Pune, the North East Centre for Environmental Education (NECEER), Imphal organized the third phase of Save Loktak Lake Worldwide Campaign at Marina Beach in Chennai on 26th March, 2011. The Campaign was conducted with the help of 20 volunteers and started with a pledge to save the Loktak Lake in Manipur.

People were made to realize the calamities possible aftermath of the lake’s disappearance. Pamphlets were distributed and discussions undertaken so everyone could understand and better appreciate the importance of the Loktak Lake to the people of Manipur and to the rest of India. The increasing number of the youth involvement is a proof to the success of the ongoing Worldwide Save Loktak Lake Campaign.

The third phase of the campaign has been started with Pune and the next campaign will be organised at Puducherry (formerly Pondicherry) in April 2011 under the leadership with a similar mission of creating awareness  about the present situation of the Loktak Lake and to conserve it.

The campaign is supported by more than 20 international and national organisations. It will conclude in 2012 with a grand campaign at the vicinity of the Lake by involving the local inhabitants, local NGOs and the Government officials amongst others.

Keibul Lamjao, the only floating national park in the world is situated at the south west part of the lake. It is home to the endangered Manipur brow antlered deer„ Sangai – Cervus eldi eldi and many other endangered species. The lake is an Important Bird Area (IBA) as identified by BNHS, Mumbai and Bird life International.