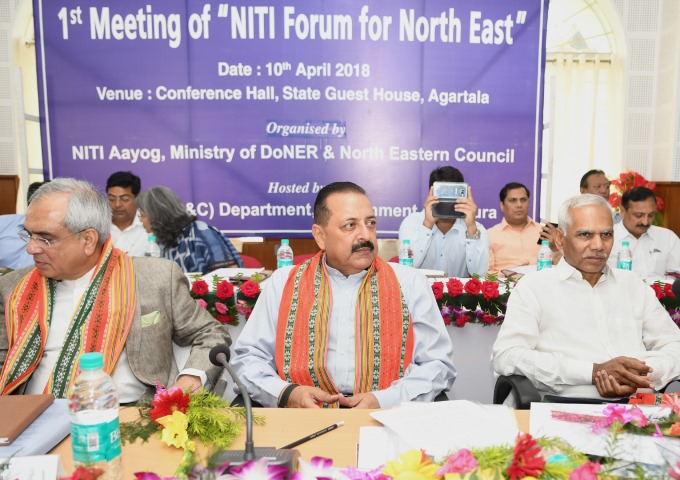 In his inaugural address, Shri Rajiv Kumar said the focus of development projects in the NER will be based on the concept of HIRA (Highways, Inland Waterways, Railways and Airways) as spelled out by the Prime Minister Shri Narendra Modi. He said emphasis will also be made on Education, Health and Skill Development in the region. He further said that Horticulture, Tourism, Food Processing, use of Bamboo and Made in North-East will be developed through five Mission Mode projects in a time-bound manner.

Speaking on the occasion, Dr. Jitendra Singh, said the Government has focused on development in a region which more or less remained out of the mainstream for the last seven decades since Independence. He said there has been a significant 21 % rise in fund utilization in the North-East during the last three years. Dr. Jitendra Singh said the Central Government has now committed full 100% funding for development projects in the NER, as against 90-10 ratio earlier with the State Governments funding 10% of the total cost.

Nagaland Chief Minister Shri Neiphiu Rio pointed out that Kohima is the only state capital in the North-East which does not have an airport. He said the State Government has acquired land for this purpose and at least one small airstrip at Kohima should be constructed for providing air connectivity to Nagaland under the UDAN scheme.

Meghalaya Chief Minister Shri Conrad Sangma said that development is the solution for all socioeconomic problems in the region and through Infrastructure and Connectivity, many development problems can be solved. He said that the National Games-2022 will be held in Meghalaya, which will coincide with the 75th Anniversary of Indian Independence. He further said that economic challenges of the NER can be met by removing the physical and economic barriers.

Chief Minister of Tripura, Shri Biplab Kumar Deb thanked the Prime Minister for giving Tripura an opportunity to host this prestigious event. He said that the State bordering with Bangladesh from three sides imports more than Rs.300 crores annually from Bangladesh but exports a meager Rs.4.6 crores. He said certain provisions prohibit export of rubber from Tripura, but the same is routed through West Bengal. Shri Deb said Tripura has immense potential in fisheries as the state has the world’s best climate suitable for aquaculture but this has not been exploited.

Representatives of all eight member States of the NER gave their valuable suggestions on Moving towards a prosperous North East Region, the theme for today’s meeting. Secretary, DoNER Shri Naveen Verma and Secretary, NEC, Shri Ram Muivah explained the status of different development projects in the region.

The ‘NITI Forum for North East’ was constituted in February 2018 with an aim to ensure sustainable economic growth of the North Eastern Region (NER) of the country and periodically review the development status in NER.