NECEER to Organise Worldwide Save Loktak Campaign in Pune 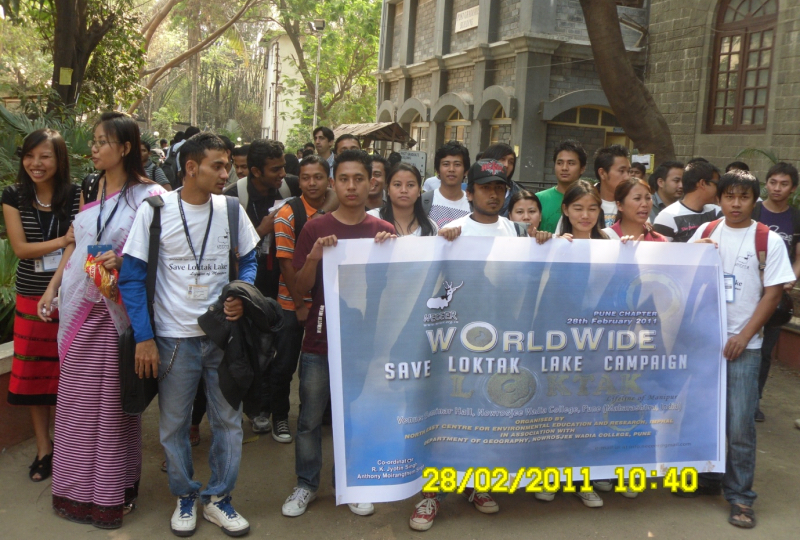 The North East Center for Environment Education & Research (NECEER) will be initiating the third phase of the ‘Save Loktak Lake Campaign’ in Pune tomorrow. With “Save Loktak Lake, Lifeline of Manipur” as its slogan, the campaign will be held at the seminar hall of Nowrosjee Wadia College, Pune.

The ‘Save Loktak Lake Campaign’ was launched as an awareness programme by the NECEER, Imphal towards the conservation of Loktak Lake in Manipur. A total of 600 volunteers and 32 city coordinators are involved in the organising of this international campaign.

The campaign has witnessed an increasing number of the youth involvement and has helped raise considerable awareness on the status and issues of Loktak Lake and its management. Pune is the 10th city hosting the Save Loktak Lake Campaign by NECEER, where the event will be hosted in association with Deptt. of Geography, Nowrosjee Wadia College.

Both the phases were a huge success with mass involvement from across the country. The campaign is supported by more than 20 international and national organisations and is slated to conclude in 2012 with a mass campaign at the vicinity of the Lake by involving the local inhabitants, local NGOs and the Government officials among others.

Speaking on the motivation behind the campaign, NECEER Founder & Managing Trustee Kh. Jibankumar Singh explained, “To create awareness about the conservation of Loktak Lake, the largest fresh water lake in Northeast India, is the motive of this campaign.”

Keibul Lamjao, the only floating National Park in the world is situated at the South-west part of the lake. It is home to the endangered Manipur brow antlered deer ‘Sangai’ (Cervus eldi eldi) and many other endangered species. The lake is also an Important Bird Area (IBA) as identified by BNHS, Mumbai and Birdlife International, UK.

At the same time, as wetlands around the world face a crisis owing to the pressure of population, urbanisation and climate change, it has become very important to effectively manage and upkeep wetlands and ensure their sustainable management. The Save Loktak Lake Campaign is definitely a positive step which will go a long way in preserving and protecting the Loktak Lake ecosystem.

Previously on the Green Media Network: