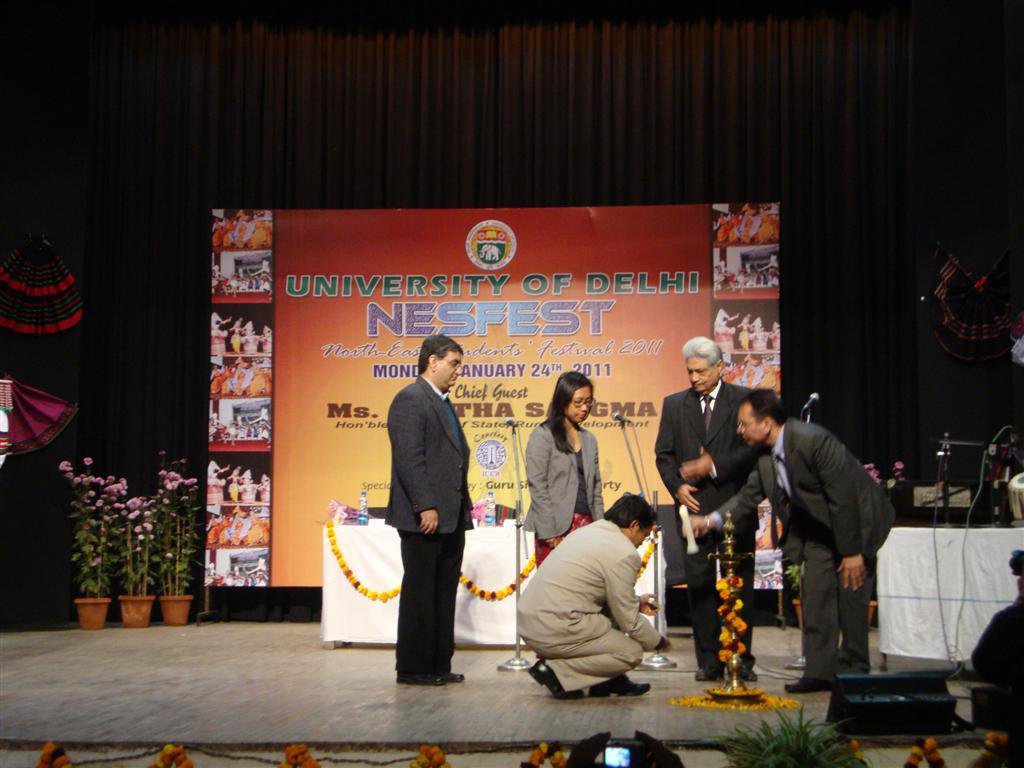 The festive season at Delhi University is on these days and colleges and departments are all out to host meets, fests, conferences and gathering of all kinds. The Student Welfare Department of the University also came forward to conduct a North East Students Fests (NESFS) 2011 with the aim of reaching out to the students from the seven sister (and one more) states.

The objective of the fest was to promote the integration of students from Northeastern region within the University. The day long fest was organised at the Shankar Lal Concert Hall in North campus and emphasized upon empowering students from the NE region. The Fest saw a foot fall of about 300 students from across Delhi University.

The University of Delhi (DU) is indeed the most popular university in the country and attracts a large number of students from all over India. A major percentage of students who leave the Northeastern states for higher studies also choose DU as their academic destination.

The Fest therefore aimed to generate awareness among the students about the risks and safety measures which can be taken to avoid any kind of mishap while living in the unfortunately high crime rate city as that of Delhi. Other issues issues and problem faced while living in the city were also discussed during the Fest.

Addressing the students, Prof. S. K. Vij said, “The main purpose of the fest is the integration of students coming from various parts of the country with the city.” He mentioned that he has asked all the colleges of the University to nominate one mentor from each college for dealing and addressing issues and problems faced by the students from the Northeast.

Prof. Vij appreciated the crucial role being played by the Delhi Police in ensuring the security of the Delhi public and highlighted how it is the responsibility of the same Police to make the students from NE region feel safe and secure. While welcoming the students, the Pro Vice-Chancellor echoed similar sentiments. “It is a pleasant experience to have students from different states as it results in cultural exchange.”, Prof. Suneja shared his own enthusiasm.

The Hon’ble Minister of State for Rural Development Ms. Agatha Sangma also greeted the students from the region. “One of the important factor, which is an issue of concern, is security”, she said and elaborated that at a time when lot of violence was taking place against the students from North East, an MP member forum was formed and the issue was taken to the Prime Minister to ensure better safety.

She discussed how things have improved now and are far better than in the recent past. There has been sensitization of the police regarding the safety of NE students. Formation of help line number has also helped the students in time of need. Ms. Sangma also highlighted the importance of unity in diversity and shared from her personal experience, to drive the point home.

With a smile on her face, she announced how during her oath taking ceremony, she wore her traditional dress yet took the oath in Hindi. Having multiple identities and respecting our ethnicity should make us all even more proud Indians, was the take home message from India’s youngest Minister.

The NESFEST also included an interactive session with the Delhi Police officials, giving the students an opportunity to share and discuss their problems and issues.

Additional DCP R.K. Singh began the session clarifying, “The students should not hesitate to approach the Delhi Police. They should file their complaints, no matter how small or big, with the Police.” Speaking for the girl students from the region, the panel of Delhi Police informed that there are now many lady officers and a women help desk in the campus.

The police is vigilant and is there to help round the clock. The panel shared how meetings with North Eastern students are been organized in various colleges to discuss their problems and issues.

A separate helpline for female students is now operational and the numbers 1,091 and 1,291 were shared with the students by the Police. The 100 number is also operational and can be used for students for obtaining any kind of help. Students discussed their problems with the police personnel. They raised issues and expressed concern about their safety asking for doing much more to create the required sense of security.

The students highlighted problem related to harassment, landlords attitude and the untimely price hike in the rent as most of the student population stays around the university. They also asked the police to carry out workshops with Delhi citizens for improving their behaviour towards the student community in general and Northeastern students in particular.

The NE Students Fest was made colourful and enchanting by various dance groups from the Northeastern student community in Delhi and their performances. The program was honoured by the presence of  Manipuri  Dance Guru Singhajit Singh and his group with a much appreciated performance. Traditional songs and dance presented by the students gave the final touch to the Fest. The Fest concluded with Vande Mataram, in a unique and unusual kirtan style and reinforcing the message of taking pride in being a citizen of such a diverse and united India.

With inputs from Anjana Dey