On 12th December 2009, as the world leaders met at Copenhagen to deliberate on a Climate Treaty for securing the future of the planet, Delhi Greens and a series of organisations (BEENET, NEPA and OISCA Manipur) celebrated the Global Day of Climate Action at and in collaboration with Manipur University, Imphal. The objective of the celebration was to raise local, regional and global awareness on the impacts of climate change on human beings. The objective was also to demand a real deal for fair, ambitious and binding global climate treaty to save all life forms on the Earth.

The activities conducted included Painting Competition for the students on the theme of “Global Warming and My Responsibility” at Canchi Park, Manipur University followed by Mural Painting and Candle Light Vigil at the Traffic Island, Manipur University. Over 200 individuals joined the event and 30 school students participated the painting competition. The best entries were given awards and certificate were distributed to all the participants. 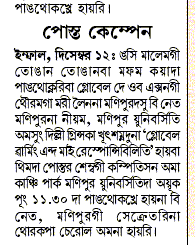