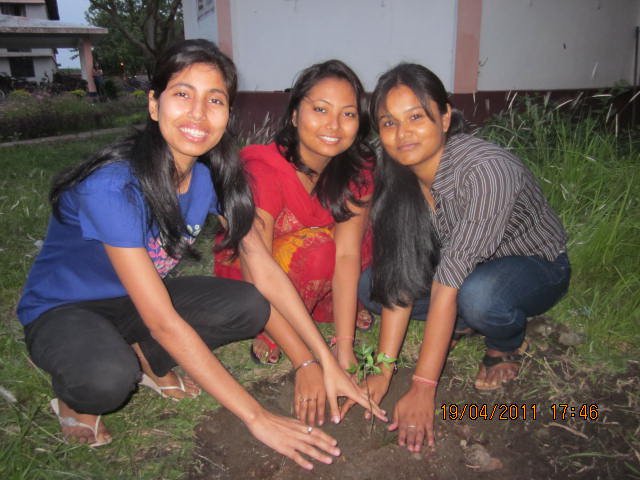 The Ecotourism Society of North East India has been celebrating a unique tree plantation festival woven around Rongali Bihu which marks the onset of the Assamese New Year and the coming of Spring! “Tree Bihu”, as the festival is being called, is a week long campaign from 13th to 20th April, 2011 wherein the general public is being motivated to plant at least one tree in the first week of the New Year!

The campaign stands firm on the belief that planting a sapling on the auspicious occasion of Rongali Bihu will definitely boost the initiative of saving our environment from imminent degradation. The underlying objective of organizing “Tree Bihu” is to generate large-scale awareness among the masses and promoting afforestation and plantation activities.

This year is the second edition of “Tree Bihu” by the Ecotourism Society of NE India where over 80 volunteers traveled to different locations in the North East Region (NER) and also used new and social media to motivate local people to plant saplings, especially the ones that have good medicinal value. People were motivated to dress up in their traditional attire and carry out the plantation activity and also photo-document the same.

The photographs were to be sent to the organizers to be used to inspiring others from around the world to celebrate Bihu in a similar manner. With all the existing beauty and charm of the Bihu festival, that welcomes the advent of nature in the purest form, where we hear the cuckoo and see new buds coming out of the trees, the element of ‘Tree Bihu’ only added to this splendid festival!

The festival of Bihu is closely associated with nature and it has also been this reason that the Ecotourism Society of North East India could not let the trees behind. When we celebrate “Manuh Bihu” and “Goru Bihu”, there is no reason that we should not celebrate “Tree Bihu” to plant and worship trees, which are critical in providing us so much. As the society gets more materialistic and self-involved, our association with nature is diminishing.

The NER is an amazing green paradise which exists with a very close association with nature. However, the ‘western’ winds of this change towards a materialistic society are now blowing in several parts of the NER as well. It is very important that we preserve our roots and learn from them if the region has to grow higher and stronger. The ‘Tree Bihu’ festival is definitely another step in that direction and will go a long way in protecting and promoting environmental conservation in the North East.