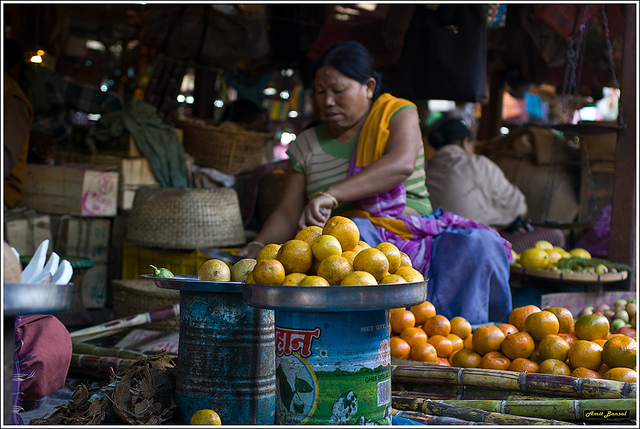 Winter bliss is slowly covering the hills and moving towards the valley of Manipur. And it brings with it the pleasure of devouring winter fruits and vegetables. Of all, orange has become symbolic of winter bliss and consuming it is a casual ritual for most people in Manipur. But this year, it is feared that people may have to settle for fewer oranges or purchase it higher prices. Reason: the impact of climate change impact!

Mandarin orange (Citrus reticulata) is most common among citrus fruits grown in India. It occupies nearly 40% of the total area under citrus cultivation in India. In India, oranges are mostly grown in the states of Maharashtra, Madhya Pradesh, Tamil Nadu, Assam, Orissa, West Bengal, Rajasthan, Nagaland, Mizoram, Arunachal Pradesh and Tripura. Citrus industry in India is the third largest fruit industry of the country after mango and banana. India ranks ninth among top orange producing countries contributing 3% to the world’s total orange production.

According to the State Horticulture Department sources, in the year 2008-09 Manipur state alone produced around 31,968 metric tonnes of oranges cultivated in an area of 4,138 hectares. Of this, Tamenglong district produced 17,311 metric tonnes. But all is not well in this district this year and orange cultivators here are abandoning their farms/ orchards due to sudden death of the orange trees owing to an unknown plant disease.

Many living in the district are expecting orange production to decline this year in view of the withering and drying up of the trees even as they remain silent and unaware of the reason or the cause of such disease.

The festival offers an opportunity for both the growers and fruit processing industries to clinch deals with orange farmers based on various aspects such as collection points, quantity of product, labour charges, transportation charges, etc. The district though grows much orange but still lacks behind in terms of effective channeling of the available technological knowhow, quality fruit production, disease and pest management, post harvest technology, processing and effective marketing.

Hence such festivals are significant as they give people the much needed awareness and knowledge to increase orange yield and shield them from unwanted disease. High yield will indirectly wean people away from the age old tradition of shifting cultivation which that requires the clearing the biodiversity rich thick jungles for growing crops for subsistence. This year the festival organisers bear much responsibility in regard to awareness on climate change impacts and how to combat it at the local level to make a bigger difference on the global front.

Many experts are of the view that lack of proper care and climate change are the major factors for the dying of the orange trees.  “Except some, most of the cultivators in the hills are not serious about giving nutrients to the decades-old orange trees not to speak of attending them with proper technology”, A Rajlakshmi, specialist of Indian Council of Agricultural Research, Manipur Centre was quoted in the press.

According to her, the orange production declined in Manipur because of lack of attention to the trees, no spraying of insecticides and indiscriminate killing of wild birds besides the untimely rains due to climate change during the Monsoon season.

Not too far away in Tripura, a similar Orange and Tourism festival is also hosted. Tripura hasn’t reported any such fear and discourse yet. Held at the Jampui hill, this festival too attracts large number of tourists, both domestic and foreign. Tripura has gone quite ahead in establishing the area as one of the best tourist spots in the Northeast region.

Tourist Department of Government of Tripura has already constructed a very modern tourist lodge- ‘Eden Tourist Lodge’ at Vanghmun village in the Jampui hills which is well equipped with modern amenities. With an aim at promoting and enhancing higher yield of orange, Tripura has made best use of the festival and has succeeded in bringing more economic development through tourism as well.

By and large, such promotional activities needs to be conducted with bigger responsibility and aimed at achieving overall development of the region. Preparing and combating climate change impacts will definitely hold higher priority this year. Lack of awareness and knowledge is a threat not only to orange plantation but more to the region’s ecosystem.

Image by ZeHawk over Creative Commons