A Fair of Cultures: The Hornbill Festival of Nagaland 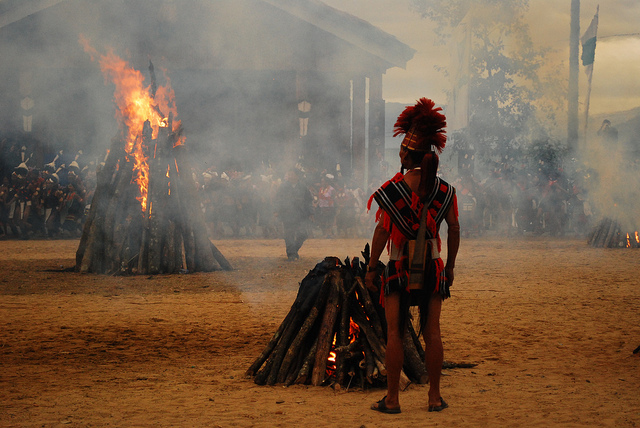 The state of Nagaland, the land of forgotten world, is largely a mountainous state extremely charming and lovingly beautiful. About one-sixth of Nagaland is under the cover of tropical and sub-tropical evergreen forest including palms, bamboo, and rattan as well as timber and mahogany forests. Agriculture is the most important economic activity in Nagaland, with a large proportion of the population engaged in it. Owing to this, most of the state festivals revolve round agriculture.

All the festivals here are considered sacred by the people and so participation of all is compulsory. The tribes of Nagaland celebrate their festivals with dedication and passion. Leaving behind the age old concept of celebrating individuals festivals separately by the various tribes, a united platform was set up in 2000 by the State Directorate of Tourism to revive and protect the rich culture of Nagaland and display its extravaganza and traditions under one roof, now popular as the “Hornbill Festival”.

The Hornbill Festival usually takes place between the 1st and the 5th of December in Kohima. It is held at the Naga Heritage Village, Kisama which is about 12 km from Kohima. All the tribes of Nagaland take part in this week long festival. The festival has became the window for many tourists to have a glimpse of all Naga festivals at one time and in one place.

Named after the hornbill, a bird that shows up in the folklore of most of the state’s tribes, the seven-day festival is one giant colour-splashed hodgepodge of dances, performances, crafts, parades, games, sports, food fairs and religious ceremonies. The festival exposes the Naga people to their mainland counterparts and reinforces Nagaland’s identity as a distinct state in India’s federal union.

It is interesting to note that the Hornbill Festival is held annually at the Cultural Village constructed permanently for the festival. Most of the year, the model village is relatively deserted except for a few curious visitors and tourists, who browse through the cluster of traditional houses that reflect the architectural styles of the different regions of the state. During the Hornbill Festival however, the place transforms into a bustling carnival. The organizers display good marketing skills similar to those of tourist spots around the world by strategically placing souvenirs and handicraft stalls at the entrance and exits of the complex.

During the festival, one’s attention is easily drawn almost hypnotically to the source of throbbing drums from within the tribal huts. Young boys and girls beat in unison on the hulls of canoes with masks, weapons, pots, pans and other everyday items of a traditional village home. There are also thatched huts; typical Naga boys dormitories (morungs) of each tribe which are constructed in their respective tribal architectural designs to simulate a real village scene.

The morungs are places where young boys learn to socialize and live in a community, where survival skills are taught against the backdrop of head-hunting and the constant fear of wild animals and the enemy. It is a sort of a school where they learn ideals like honesty, bravery as well as arts and crafts like tool-making, carpentry and handicrafts. This is also where traditional knowledge and folklore is passed from one generation to the other and stories, legends and myths of each tribe is kept alive.

In the arena, tribal dances are numerous, depicting the culture of the many Naga tribes. Over the five days of the festival, the rich diversity of the proud tribes that inhabit this hilly terrain is showcased. Different forms of dances from the war dances with their whooping chants, hunting party dances, as well as those depicting the simple tasks of tilling the fields and of the harvest: the initiation of the young into adulthood, and wedding dances are all a delight to vistors. Besides the dance, traditional Naga wrestling competitions are also held where sturdy, well-built men with firm muscles grip their opponents by the waist band, not unlike the Sumo style, and struggle to flip them over.

Among all extravaganza which are mostly cultural, the festival also hosts events like the Hornbill Car Rally and Hornbill Rock contest. The Hornbill Car Rally is supported by the Government of Nagaland and organized by the Nagaland Adventure and Motor sports Association (NAMSA) where top drivers and navigators from across the Country participate. The rally is a visual delight with speedy cars zipping across beautiful landscapes and hills of Nagaland. Tagged as the longest music festival in the country, the Hornbill National Rock Contest is a seven-day-long festival, that is but an ultimate pit stop for any traveler!