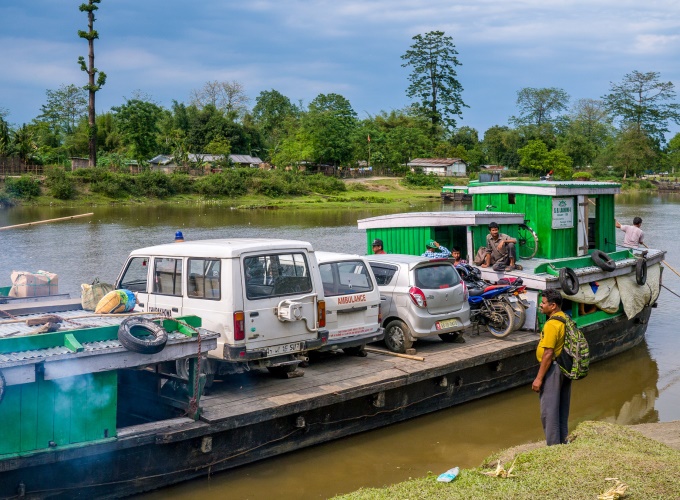 The soul of Assam, the Brahmaputra is not just another large water body wending its way from its hearth through deep valleys and gorges and finally ending into the sea. It is the culture and lifeline of Assam. It also would not be incorrect to say that the history of Brahmaputra is the history of Assam. Colloquially known as Luit, Luhit, Burha luit, etc. Brahmaputra literally means ‘Son of Brahma’.

Traversing three countries and many cultures, Brahmaputra originates from the glacial womb of Chema-Yung-Dung of the Kailash range near the Mansarovar Lake and flows through the Tibetan plateau, vast plains of Assam and the deltaic region of Bangladesh. Its tributaries are Subansiri, Dibang, Dhansiri, Manas, Kolong, to name a few. Statistics read that from its origin at a height of 5,300 m, the 2,880 km long river travels 1,625 km as Tsangpo in China, 918 km as Brahmaputra in Assam or Siang in Arunachal Pradesh and 337 km as Jamuna in Bangladesh.

Legend has it that the river’s gestation was in the womb of Amogha, the wife of an ancient sage Shantanu who dwelled in the Kailash ranges. Captivated by the beauty of Amogha, Lord Brahma’s proposal was however refused by the chaste, since she did not recognise him. But later she delivered an aqueous form with Brahma at a place called Yugandhara, after Shantanu realised the true intention of the Lord.

Another myth associated with the river is that of Parasurama (an incarnation of Vishnu), son of Jamadagni who suspected his wife Renuka of adultery and ordered his five sons to behead their mother. While four of them refused, the youngest Parasurama picked up his axe and severed his mother’s head. Burdened with matricide, his axe remained stuck to his hand. He visited many ‘tirthas’ or pilgrimage but the axe came out only after taking a dip in ‘Parasaruram kund’, a portion of the river that currently lies in Arunachal Pradesh. Relieved by the heinous crime, he also cut down a channel for the common good of the people. According to some, the river is also known as red river because the blood stained axe of Parasurama was washed in it.

Carrying as much water as most of the rivers in India put together, Brahmaputra is among the highest sediment carrying river in the world. Oodles of silt get deposited in the river bed and the resulting fluvial geomorphology is constantly at work. The sandbars islands that sediments create are locally called ‘chars’ with which settlements coexist. Without much surprise, both the largest and smallest riverine islands: the alluvial island of Majuli (only river island district in India) and the peacock islands of Umananda (in Guwahati) are found in this same perennial river.

The Brahmaputra sustains a plethora of biodiversity, including vivid flora and avifauna. Along the river lie a few National Parks and some wildlife sanctuaries. The watery lands of the river support diversified aquatic life, especially fish, which continues to be an integral part of Assamese cuisine. It is also the home to the city animal of Guwahati: the Gangetic dolphin. Brahmaputra and its tributaries have always contributed in creating and recreating floodplains. The Assamese civilization that now dwells on the Brahmaputra floodplains has benefitted from the supportive environmental space. The river is also instrumental in the assimilation and amalgamation of different socio ethnic groups into the region.

Brahmaputra is embedded in the imagination of the civilisation in the form of folk songs, folklore, customs and traditions and more. Until say a hundred year ago, human settlement did not risk from the now unconquered river. Frequent floods every year have proved to be a threat to the general well being of the people. The Assamese bard Dr. Bhupen Hazarika in his songs described how the wrathful river witnesses decline of humanity, humans who hardly endeavour to harness the water resources of the treasured river.

Sampling of Brahmaputra river water reveals that its water is not fit for drinking, but it can be used for agricultural purposes and for day to day chores. Impurities from inorganic materials or agricultural runoff have however deteriorated the quality of the river water to an unimaginable level. It is today struggling with oil discharge and waste disposal especially from the urban centres it flows through.

The annual flood has a magnitude of 48,160 cu m/ second. The braided river and its tributaries undergo humongous changes during the flood season. The loss of humans and wildlife, property and environment is colossal during these floods. The sparse population in the past learned to adapt to the pattern of the river but now the valley itself is choked with an exploding population of more than 31 million. This has led to the erosion of banks and the agricultural fields are being eaten up. News about embankment erosion specially in the northern banks of the river has become ordinary now. Due to the unfortunate positioning of the river, it is also seismologically unstable.

The potential for hydro-power generation that the Brahmaputra possesses has attracted large-scale multipurpose-dam projects not just in India but also in China. Since humans can but only submit humbly to the fury of nature, the Brahmaputra, embedded in the imagination of every Assamese, should also be left untamed and unconquered. Nevertheless Brahmaputra has always remained the muse and metaphor of life specially for the people living in its plains and valley.

Article by Prahelika Deka. Image by Mike via Flickr