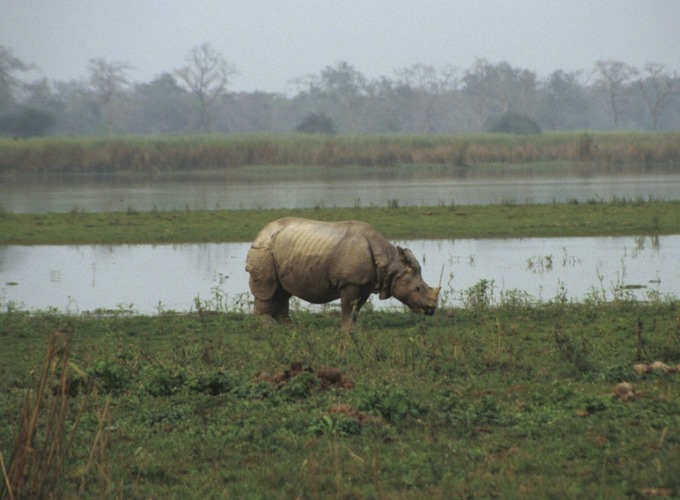 The great One Horned Rhinoceros (Scientific Name: Rhinoceros unicornis) belongs to the family Rhinocerotidae and is also known as the Indian Rhinoceros. As the name suggests, the One Horned Rhinoceros has single nasal horn, unique to this species and they are the largest of the Asian rhinos. A full grown rhino weighs approximately 2,200 kg to 2,500 kg and range in height from 67 to 73 inches and 146 to 150 inches. These great swimmers can also run upto 55km/hr. Clad in armour-like grey brown skin and thick folds with very little body hair, the one horned rhino is the pride of Assam.

The one horned rhinos, that are today confined only to the alluvial plain habitat of Assam, West Bengal and parts of Nepal, were once widely distributed in the marshy plains of the Ganges, Brahmaputra and Indus. Their substantial disappearance is mainly due to loss of alluvial tracts in northern part of the Indian sub-continent coupled with climatic changes. Fossil remains of the late Pleistocene age can be found in the upper Shiwalik beds. Evidence of Rhinoceros unicornis population during the Mesolithic age can also be found near Bhimbetka, Bhopal, Punjab foothills and southern state of Madras. However, by late nineteenth century, they were restricted to fragmented patches of grasslands and forests (typically reserved and protected) in Nepal’s terai region, Bhutan’s dooars and the Brahmaputra valley.

According to IUCN Asian Rhino Specialist Group (2013), there are approximately 3,550 Indian rhino survivors. Out of these, 2,413 rhinos (according to 2018 Rhino Census) dwell in Kaziranga National Park (KNP) of Assam alone. This popular tourist destination lies in the valley of Brahmaputra, constituting the districts of Karbi Anglong, Nagaon and Golaghat. Home to this vulnerable species of rhino, Kaziranga National Park is a UNESCO World Heritage Site. The 4302 km KNP grassland is strewn with marshy swamps, tiny boggy wetlands and meadows of elephant grass. First declared as a Wildlife Reserve in 1916, it was converted to a National Park in 1974. Host to 2/3rd of total one-horned rhino population, KNP today is also the living abode of wild-buffalo, tigers, elephants, wild pigs, bison, swamp deer as well as migratory birds.

Apart from the aquatic life flourishing in the river shores and ponds, one can also find prominent trees like the cotton trees, amla, elephant apples and Kumbhi. The uniqueness of this National Park lies in the fact that unlike others, it does not exclusively comprise dense forest. 66.44% of it is vast grassland, 27.98% impenetrable forestland and 5.58% of water bodies. Another specialty of KNP is that it is the known as the home of the Big FIVE since it is the breeding ground of the great One Horned Rhino, Tiger, Elephant, Swamp Deer and Wild Buffalo. It is also noteworthy to mention that KNP holds the highest density of tiger population in the nation, due to which it was declared a Tiger Reserve in 2006.

Located on the shores of the Brahmaputra, in the districts of Darrang and Sonitpur of Assam, lies another stronghold of the one-horned rhino, the Orang National Park. Formed of alluvial land, this Mini Kaziranga National Park renders a wide array of flora and avifauna. According to a 2015 estimate, there are 100 rhinos in this National Park. Situated in the Marigaon district of Assam, Pobitara Wildlife Sanctuary is also known for high density of the great Indian Rhino population. Home to approximately 93 rhinos today, it also is a safe haven for both resident and migratory birds. A UNESCO World Heritage Site and a significant tiger reserve, Manas National Park too harbours around 32 one horned rhinos (as of 2015).

The one horned rhino is thus undeniably a heritage of Assam. The sociocultural lives of the Assamese people are highly intertwined with this vulnerable species. Being the State Animal of Assam, the one-horned rhino is part of the logo of various governmental organisations like the Assam Oil Company Ltd. The mascot of the 33rd National Games held in Assam, was also a baby one-horned rhino Rongmon, holding a bright torch. The Assamese also gift carved statues of rhinos to outsiders as memoirs and souvenirs of their identity.

It is however a catastrophic to note that though one of the most potent symbols of Assam state, the one-horned rhino is still threatened with poaching. Possessing a horn of humongous value in the international markets, ruthless and persistent killing of the rhinos has become the single most important reason for their decline. A report from 2012 reads that nearly 115 rhinos were killed in 10 years. Another threat to the one-horned rhino is the almost annual savage floods during monsoon. Caught in this menace, rhinos either lose their lives by getting washed away or by starving. More than 90 rhinos have been reportedly killed since 2013 in KNP alone.

However, the success story of the Government of Assam narrates that in a combination of National Parks, Wildlife Sanctuaries and Protected Areas, the number of rhinos has increased from 2,505 in 2012 to 3,500 in 2016, which is more than the figure as per Indian Rhino Vision 2020. New strategies have been taken up to relocate one-horned rhinos from Kaziranga National Park to infuse rhino population in other reserved areas as well. Manas National Park, that now has more than 30 rhinos and 14 calves, is one such example. Mounds are created, sometimes by the local communities, to help rhinos take refuge during floods. The government at such times also calls for speedboats for faster transportation of these helpless creatures. However, the need of the hour for one and all is to join the fight to preserve this majestic creature to not only avoid its extinction but also save the pride of not just Assam but of India.